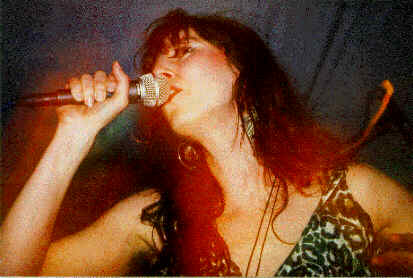 Front woman Anja is a shaman, a poet and a whirling derwish on the live stage. Her voice is often compared to that of Patti Smith. Shes the author / composer of most of the folk- and blues-oriented songs of the band, like Bring Back The Light or Castle Of Dreams.
Her musical experiences so far include several bands (The Lovers among others) and the rock- opera Othello. Anja says:

 Music is a form of magic. Like the ancient shamans I use music and dance to put myself into a trance and to gain new ways of perception.
Im interested in any kind of magic and mystics, the unknown and all that goes beyound the known planes of reality.
Like the Red Indians of Northern America who are reaching other spheres of perception with the help of drums and rattles, Im trying to open gates to new worlds with my songs.