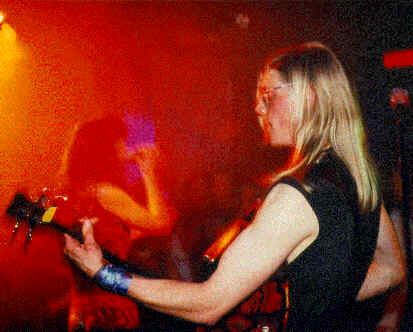 Bass player Frank began his musical life with a strange stringed instrument known only in the bavarian backwoods and resembling some sort of a harp. Since 1991 he plays bass in a number of munich bands (Rubber Duck, Lemon Curry and others); since 1994 hes dedicated to Fuckin Wild only. Frank about his view of the cosmos:

 The fusion of elementary power and driving dynamic with the rhythm of life, omnipresent as an expression of a fundamental desire for truth and fulfillment.
Mainly because of this endless longing of mine I turned towards the electric bass some time ago. Ever since then I could channel my energies. I was and still am captured by its infinite flowing stream of sounds, an harmonic wake of penetration noone can escape.
Through this Im reaching lands behind consciousness and can reach people to communicate my reality to them. For my foe is isolation. Im fighting against the overwhelming technocracy of our lifes, against the increasing dehumanisation in our society and environment and against the loss of our origins.